OVERVIEW
In recent years, phishing campaign comes in different types and forms. The attackers are known to utilize free online tools and a variety of methods in hope to harvest credentials out from the victims.

On 16 August 2020, a relatively new spear-phishing campaign was detected which appears to utilize a free online tool – Typeform. The attacker created and hosted fake online forms to harvest victims’ credentials.

In this blog, we share some of the findings from our own deep-dive investigations into the attack activities that we have observed.

PHISHING DETAILS
Our investigation showed that victims would receive variants of emails, which can contain a URL link or an attachment that would redirect the victim to a phishing page. The phishing pages observed would inform the victim about a document that was sent through OneDrive in a PDF format. 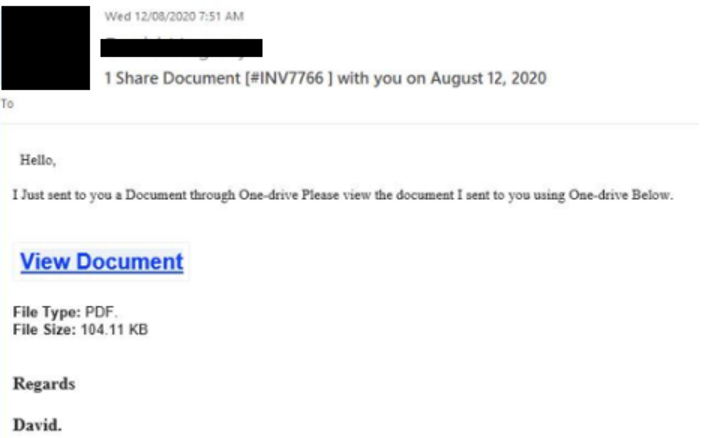 From our investigation, we have seen events where upon a successful phishing attempt, the compromised host would be used to subsequently broadcast the phishing email to all other employee using the organization email domain.

We have also seen events where the victim executed the phished PDF attachment in which the PDF would display a Microsoft labelled document with a “Open in OneDrive” button. Our investigation shows that clicking the button redirects to a phishing subdomain in Typeform with domain names such as

Figure 2 – An example of the attachment

Further investigations by the team reveals interesting network behaviour. Upon successful access to the phishing site and the user starts filling the phishing form, the page loads the domain ending with the URL parameter “/start-submission”. The phishing form first prompts for the user’s email address and then their password. Once the credentials are filled in, a button is displayed for the user to click on in order to send the inputs and view a document on the website. Clicking the button loads the domain ending with the URL parameter “/complete-submission”. Observing this traffic would represent a complete cycle whereby the victim has accessed and provided the credentials to the phished sites.

The most notable indicator of accessing the phishing page was the sequence of redirections that occur after clicking the initial phishing link. Based on this, we were able to identify potential phishing attempts with higher certainty despite the limited visibility allowed for an MDRP/MSSP like Proficio.

From our investigation, this campaign appears to target by organization rather than random individuals, as we had observed the phishing emails being sent to multiple employees within an organization together in one wave. Even if the emails were blocked, there were no repeated attempts to send the emails to the targets. This campaign does not appear to target any specific industry sector.

PRECAUTIONARY MEASURES
This could have happened to anyone of us that works in any organization whom we would unexpectedly receive phishing email send by reputable or known users that were being compromised. It is advisable to safeguard you and your organization to avoid being the next victim from phishing attacks and credential theft. We would recommend organization to consider the following measures if this has seen within your environment.

OVERVIEW
It’s no secret that phishing is one of the most common types of cyberattacks, both to individuals and organizations. According to the 2020 Verizon Data Breach Investigation Report, one out of four breaches involved phishing. So when Proficio’s Threat Intelligence Team received a client request, asking for assistance with a phishing incident, we conducted a thorough investigation on the specific threat actor. Below we share the key findings from our deep-dive investigation, including the hooks used and key targets for this campaign.

PHISHING CAMPAIGN DETAILS
The threat actor appears to be utilizing compromised user accounts within the targeted organization to send out phishing emails to internal contacts within their mailing list. We observed that such phishing emails sent by the legitimate, but compromised, user accounts would contain a download image that resembles the original PDF download button (Figure 1). 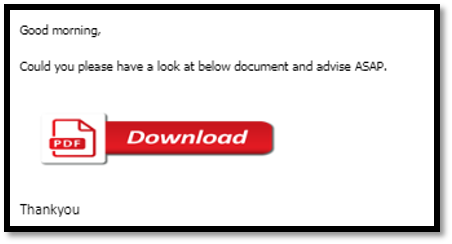 The Proficio’s Threat Intelligence Team dissected the email received, observing the below PCAP from a simulated access attempt against the download link (Figure 2). While the download button masquerades as an attachment, it appears to be a request URL link. The threat actor employs pretty standard social engineering “hooks” to creates a false sense of urgency with words such as “advise ASAP”. The purpose, of course, is to lure the victim into quickly clicking on the button without thinking too much. 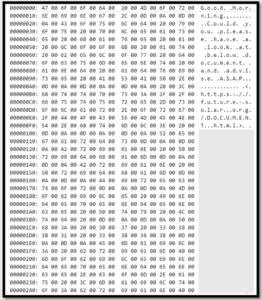 Our analysis of the PCAP file (generated upon clicking on the download image seen from the email) reveals a redirect to an external request URL. Simulated access against the external request URL in a controlled environment reveal a redirect to a website with a “CLICK HERE TO VIEW” button. This phishing “hook” resembles a secure document intended for the victim to access.

If a victim clicks on the “CLICK HERE TO VIEW” button, they would be directed to a fake Microsoft login page. When we input fake credentials into the login page, the adversary directs the user to an error page and requests for the credentials to be submitted again. We believe that the second credential request is meant to direct the user to the real Microsoft login page, a setup very similar to those practiced by other phishing campaigns. There are no other redirections observed subsequently. 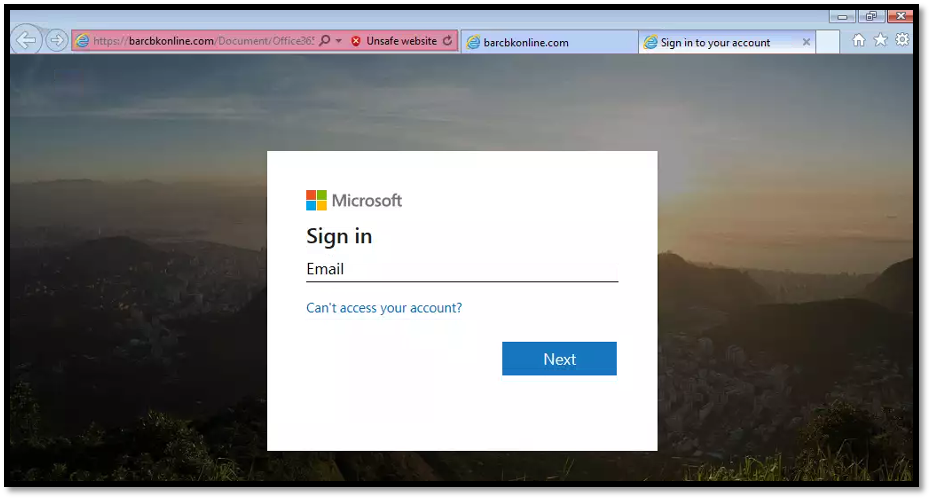 Our investigation revealed that this campaign targets organizations rather than random individuals, as we observed that the phishing emails were sent to multiple employees within an organization together in one wave. Our analysis and study of the threat actor’s infrastructure and TTPs reveal that the threat actor conducting the phishing campaign appears to be interested in targeting specific geographic regions. We have identified the presence of several interesting strings such as “AUSTRALIA” and “YANKEE” used by the threat actor in their request URLs to organize their data depending on the geographic region associated with their target.

During our extensive investigations, we discovered the phishing emails were sent to multiple clients containing multiple different phished domains which ends with “/DOCUMENT.html”. Simulated access towards all the discovered sites exhibits the same redirection behaviour. Most of the identified activity was from inbound phishing emails. In most cases, we did not identify any click-through traffic that would indicate a potentially successful phishing attack.

While the threat actor appears to be interested in only a few geographic region, they do not appear to target any specific industry sector. We have identified multiple clients who have received emails from this phishing campaign. The sectors targeted by the threat actor most frequently were:

We will continue to keep an eye out for other phishing campaigns and intrusions that could be associated with this particular threat actor.

PRECAUTIONARY MEASURES & RECOMMENDATIONS
Phishing remains a popular attack vector because it continues to work very effectively. Anyone could receive phishing emails, and they could be sent by reputable or known users that were unknowingly compromised. It is advisable to take proactive steps to safeguard you and your organization to avoid being the next victim of a phishing attack or credential theft. We would recommend organizations to consider the following measures to protect themselves from phishing attacks.

OVERVIEW
On February 28th, the Proficio Threat Intelligence Team identified a new spear-phishing campaign that pretends to be sending a voicemail to targeted recipients.

In this blog, we share some of the findings from our deep-dive investigations into the attack activities that we have observed for this campaign.

PHISHING DETAILS
The attack starts with a phishing email pretending to send the recipient a voicemail. The email has a sender address starting with “voice@” and a subject containing text such as “New VM was sent” or “Voice Receiver”. The email contains a URL link which when clicked, redirects the recipient to a phishing page that resembles a Microsoft login page. The victim’s credentials are then stolen when entered and submitted on the fake login page.

The initial phishing attempt is merely the first step of the adversary’s intrusion attempt. After successfully gaining user login, the threat actor responsible uses the credentials obtained to conduct a targeted spear phishing campaign against other employees within the victim’s organization.

The most notable and useful indicator we generated was the sequence of redirections that occurred after clicking the initial phishing link. Such activity strongly indicated a successful access attempt to the phishing page by the victim(s), and we were thus able to identify potentially successful phishing attempts with a high level of confidence despite the limited visibility of the dataset at our disposal.

Our investigations indicate that this campaign appears to focus on targeting organizations rather than random individuals, as we observed that the phishing emails were being sent to multiple employees within an organization together in a single wave. The adversary does not appear to be targeting any specific organization as there were no repeated attempts to send the emails to the targets even if the emails were blocked or did not result in a successful click-through.

No specific industry sector was targeted; we identified several victims of this campaign, all from different sectors:

All clients that we identified had a successful clickthrough activity of this phishing campaign have been notified. If you would like to know more about this campaign and what we have found, please reach out to your Client Success Manager or Security Advisor.

FUTURE PRECAUTIONARY MEASURES
Such phishing campaigns are not uncommon, and have been heightened in the past month where multiple phishing campaigns are using COVID-19 to lure victims. The use of COVID-19 as a phishing hook has been very effective in generating click-throughs for attackers’ phishing campaigns. To avoid being the next victim of credential theft, you can put into place safeguards to protect yourself and your organization from phishing attacks.

We would recommend the following measures:

Targeted threats against shoppers and retailers alike are on the rise, especially with Black Friday coming up.

As the volume of shopping increases for the 2016 holiday shopping season, shoppers need to arm themselves with knowledge regarding account takeovers targeting their bank information using Phishing, Smishing, Spam and Malvertising methods.

Retailers also need to be mindful of their risks. New POS malware methods are now being used to steal consumer credit/debit card data. With the considerable number of shoppers on Black Friday and beyond, retailers will need to be on high alert this holiday season.

Learn more about the methods used by cyber criminals to exploit both shopper and retailer vulnerabilities to stay cyber secure this holiday season.

Scammers often use a wide spectrum of social engineering methods when persuading potential victims to follow the desired course of action. Recent campaigns are using details gathered in mass breaches such as passwords, email addresses, and other personal information gained from past data compromises. Such example of scams include:

2) Data Breach Lawsuit Case
In this case, the scammer utilizes the victim’s phone number to prove that the victim has sensitive data that was leaked. The scammer poses as an entity that is preparing to sue the company that allegedly leaked the data:

“Your data is compromised. We are preparing a lawsuit against the company that allowed a big data leak. If all our clients win a case, we plan to get a large amount of compensation and all the data and photos that were stolen from the company. For example, we write to your email and include part your number ****** from a large leak.”

The sender’s objective is to solicit additional personal information from the victim under the guise of preparing the lawsuit, possibly requesting the social security number, banking account details, etc.

On June 1st, the Florida Agency for Persons with Disabilities (FAPD) disclosed that a phishing attack had compromised a single email account. The email account contained information that had PHI of over 1,951 customers and/or guardians. Although no evidence was gathered that indicated the information was accessed, FAPD could not completely rule out that it had not been. As a result, FAPD is providing the potentially affected patients with breach credit monitoring services for the following year for free.